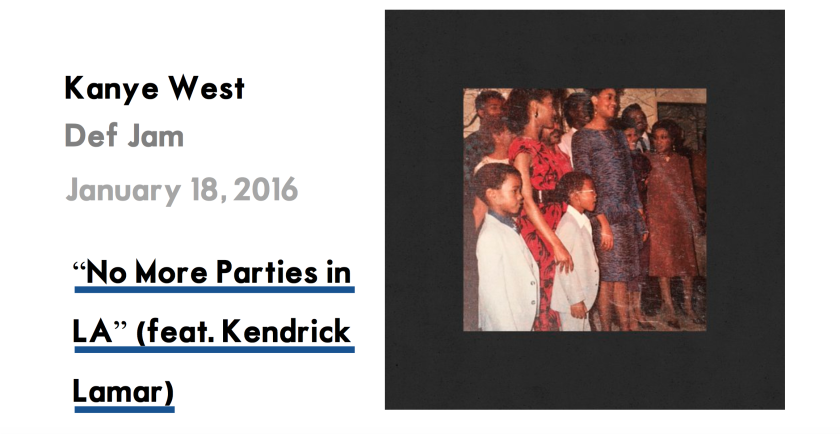 Revisiting the albums Kanye West released before his mother died is reminiscent of looking through childhood yearbooks. Every artistic phase and every triumph is met with a glow of nostalgia. Whether it’s the eye-rolling “The New Workout Plan” or the heartwarming “Hey Mama” or the stylish “Flashing Lights”, the songs from the trio of albums that started Kanye’s career connect on a familial level. And with the continuing of the G.O.O.D. Friday program, Kanye seems to be progressing further into his past. “Real Friends” bridged the gap between the forward thinking hip-hop icon the public viewed him as with a simple piano loop and more down to earth lyrics, but with the release of “No More Parties in LA”, the gap between the Kanye from Late Registration and the Kanye of today has been erased.

With help from a handful of samples arranged by Madlib and ranging from Ghostface Killah, Junie Morison, and Johnny Guitar Watson, the production aids in Kanye’s chaotic drive down memory lane. Supposedly given to Kanye by Madlib for the already star-studded My Beautiful Dark Twisted Fantasy, the production is chopped and stretched until it’s seen as both warmly nostalgic and unsettling. Starting off as a classic slow jam, it quickly escalates into a sharp loop of sinister bass lines and call-and-response vocal samples. But let’s be honest, the biggest draw to this song is the “feat.” attached to this song. And certainly Kendrick Lamar doesn’t disappoint, but the spotlight is demanded by a Kanye West who, for three and a half minutes, drops memorable line after memorable line that could only be described as “Kanye-esque”: “When did I become A-list?/I wasn’t even on a list”, “I know some fans who thought I wouldn’t rap like this again/But the writer’s block is over, emcees cancel your plans”, “I be worried ’bout my daughter/I be worried ’bout Kim/But Saint is baby Ye, I ain’t worried ’bout him”, “And as far as real friends, tell my cousins I love ’em/Even the one that stole the laptop, you dirty motherfucker”. While not perfect in terms of delivery, they remind of a more passionate Kanye West lyricist and provide more insight into his actual thoughts on his personal life, rather than describing things we can read about in Forbes. The Kanye who released a diss track about Nike is not the same Kanye here. The stream-of-consciousness spans every era of West as he reminisces about how he could have come so far, and for once his triumph and braggadocio feels deserved in one of Kanye’s most passionate songs in years.

It’s hard to not get excited for what Kanye is doing with the past G.O.O.D. Friday’s. As he continues to progress as a father and business mogul, his music is regressing into what it once was: sex, family issues, and his position in the music industry, without repeating what he’s done before. If the trinity of The College Dropout, Late Registration, and Graduation were symbolic of the youth and schoolings of a young Kanye West, then “No More Parties in LA” feels like the perfect reunion.