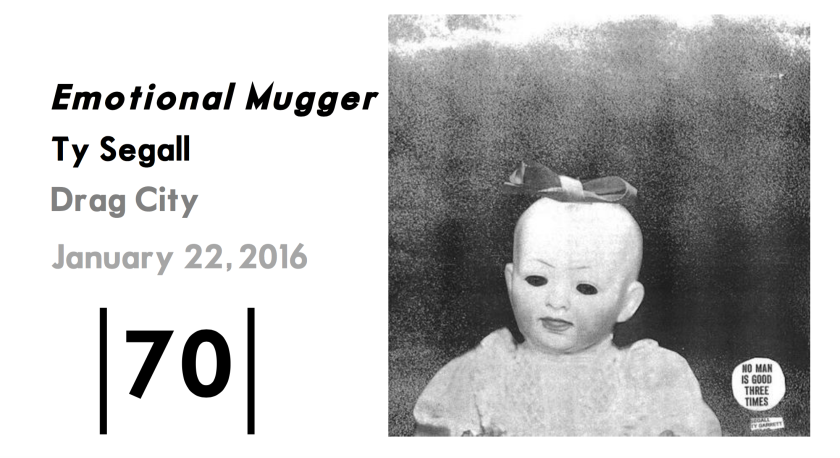 Ty Segall is a man often applauded for his ability to transform his ostentatious rock sound. And for fans of Segall with a keen ear for subtleties, they’re right. Over the course of his now ten-album discography, he’s dabbled in garage, acoustic, folk, punk, and psychedelic rock. With Emotional Mugger, he ramps up the intensity and distortion of his garage rock aesthetics and drowns himself in gritty reverb. But the biggest question Segall needed to answer with this release that bookends a long line of sonically similar releases is, “Is it different enough?”

That question can be answered in terms of his discography and in the context of the album, and in either scenario the answer is an exasperatedly disappointed “not really”. On Emotional Mugger, Segall channels a sound that could best be described as a modernized Blue Cheer led by a front man whose vocalizations are reminiscent of a John Lennon born and raised in Tim Burton’s Halloween Town. It’s grimy. And the moments on the album that do contain verses often devolve into an inhuman snarl, an attempt to capture a weighted darkness that’s often lost in the barrage of sound brought about by his fuzzy guitar work. But Segall isn’t one to focus on one theme or style. For every song that features heavy blasts of distortion, there’s another song dependent on impossible time signatures and screechy, out-of-tune notes. In a word, it’s uncomfortable.

This feeling is obvious from the album’s cover, which feels ripped from a child’s imagining of dystopia. There are moments of experimentation that aid toward the uncomfortable tone that washes over the rock instrumentation. Album highlight “Diversion” starts with a wispy squeak that grows more prominent and high-pitched atop the obfuscated delirium of guitar, bass, and drums. “Squealer Two” features one of the most intelligible chorus deliveries, but is built upon a wailing vocal drone. “W.U.O.T.W.S.” acts as garage rock’s answer to clipping.’s 2014 album closer “William’s Mix”, with both tracks attacking their listeners with walls of sound and noise purposefully off-key, off-rhythm, and without structure. This should have been the closer, acting as the perfect final note of confusion and unhinged derangement.

But that would make too much sense. Instead, Segall ends Emotional Mugger on one of the most straightforward rock songs, “The Magazine”, which sounds like a warped version of something Thee Oh Sees would release. And, in a way, it’s this unexpected nature that’s given free reign throughout the album that makes for its best element. It’s hard to make the case for anything but the instrumentals being the best part of the record considering oftentimes it’s the only discernable part. The words that do make their way to a level of comprehensibility are weakened by their repetitious nature across songs. The majority of the songs narratively describe addiction through the lens of a judgmental, vulgar observer, but it loses its luster after conveyed for the fourth time. Despite this, the repeated lyrical focus helps create a sense of déjà vu, something that the most well-crafted nightmare can never be without. And while the specifics are fairly unclear, the sentiments are not: you are not supposed to find this easy to listen to.

The difficult-to-swallow direction of the album acts as a double-edged sword: it works well as a concept and makes sense thematically, but it doesn’t translate to a stellar album. Every aspect of Emotional Mugger has been meticulously chosen to best create a sense of hysteria. Ty Segall doesn’t want you to just be confused, he wants you to be completely lost, dropping you dead center into a maze with no hint as to what the end goal is or what direction to take. And like any good puzzle, it’s best understood through attention-to-detail and patience.