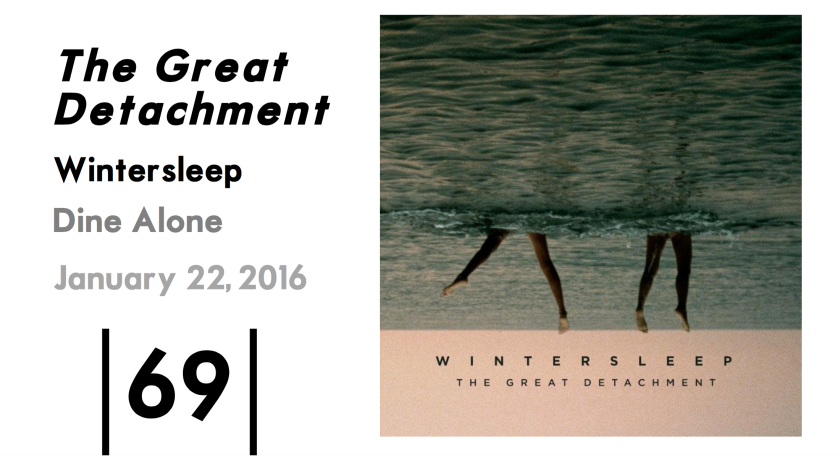 The first couple of seconds of The Great Detachment might have you think you somehow wrongfully managed to play My Bloody Valentine’s Isn’t Anything. The same dry snare beats in a fast tempo that open the “Soft as Snow (But Warm Inside)” can be found here on “Amerika” although they feel fuller and livelier. Following immediately come screeching guitars that only stop for Paul Murphy to sing in the most anthemic way “Lover don’t be sad/think of the time we have”. As far as opening an album goes, Wintersleep found near perfection. The rest of the song is as jam packed with energy, each snare hit filling all the space in the song left by the pulsating guitar chords that make up the general progression of the song. It’s a return to the sound they had in their earlier records, and one that shows a lot of promise. END_OF_DOCUMENT_TOKEN_TO_BE_REPLACED

The very nature of vaporwave demands comparison. It’s normally completely built off of other music, twisting often obscure pieces of forgotten past into ambience that is incredibly difficult to describe if the listener hasn’t heard the essentials already. For example, Sleepline, the latest release from New Dreams Ltd. (one of the many musical aliases of Ramona Andra Xavier), demands comparison because of her past feats. A song she produced single-handedly defined vaporwave to the point where the entire genre was often misconstrued as slowed-down Diana Ross, even earning the first result when “vaporwave song” is googled. END_OF_DOCUMENT_TOKEN_TO_BE_REPLACED

For anyone following the career of Evan Thomas Weiss, better known as Into It. Over It., his transition from basement-punk into the indie-rock major leagues is anything but unexpected. Since the band’s inception, Weiss has conveyed such a fierce relatability within his tunes that he has become something of a personality to his audience, an auditory best friend for when times get rough. By subtly touching on the specifics of his own life, Weiss’s records possess an immediate, gripping narrative, one that continues on the third Into It. Over It. full length, Standards. Here, Weiss strikes a difficult balance between the bombast of his earlier material and his expansion of the project’s catalogue with new instrumentation, entirely analog production, and a refined lyrical deposition. END_OF_DOCUMENT_TOKEN_TO_BE_REPLACED

So rare is it that the lo-fi bedroom pop aesthetic isn’t bogged down in one-noted instrumentation and saturated theatricalities. The majority of the Bandcamp indie scene is dominated by artists who use the familiar sound as an excuse for actual innovation and individuality. At some point, the sound of the bedroom loses its potency, exploiting the niche approach as a crutch and an excuse. But when the lo-fi tones couple with genuine inexperience and tenacity for more, it can blossom into something devastating and authentically earned. The bedroom, above all, represents a place of sanctity, a space of emotional isolation free of judgment. There’s nowhere else that you can freely contemplate your insecurities, your darkest thoughts, cast away your barriers, and let it all flow in waves of shameless misery. And on the their latest collaborative effort, The Loner(s) and Drive Me Home Please masterfully explore all that can be encompassed within this harrowingly intimate motif. END_OF_DOCUMENT_TOKEN_TO_BE_REPLACED

Anthony Gonzalez has followed an unusual directional growth as a musician, transforming his at once dream-like production into a more streamlined approach, sacrificing his unique style in doing so. The blend of shoegaze and electronica that was done so masterfully on Dead Cities, Read Seas, & Lost Ghosts has long been stripped away in favor of a squeaky clean, polished pop sound. Following his success after the infectious “Midnight City”, Gonzalez has understandably began focusing on the synth-pop approach to electronica a la Hurry Up, We’re Dreaming, which remains his least forward-thinking and safest release. Unfortunately for fans of what M83 used to be, it’s also by far his most popular. END_OF_DOCUMENT_TOKEN_TO_BE_REPLACED