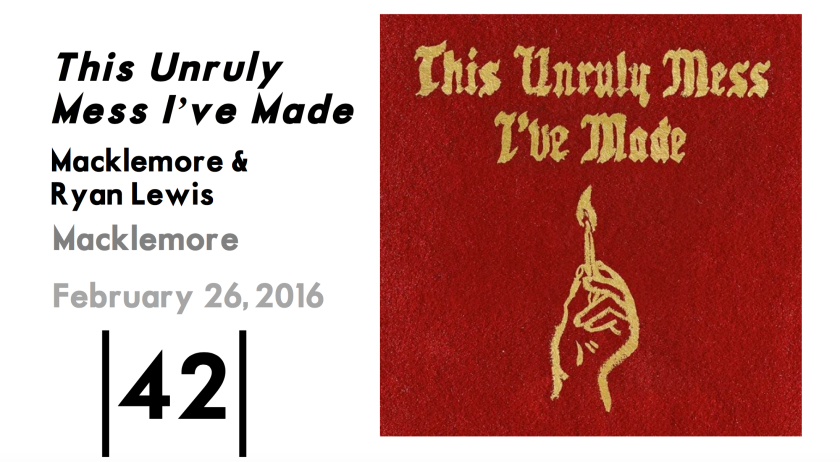 Macklemore released his first album over 10 years ago in 2005 entitled Language of My World. With his second album, Macklemore manages to shed the “sell-out” label, at the same time delivering a mediocre follow up to a mediocre debut with Ryan Lewis. “This Unruly Mess I Made” is unabashedly Macklemore, love it or hate it. On his sophomore LP with producer Ryan Lewis, Ben Haggerty doesn’t hold back, which is both this LP’s greatest strength and greatest weakness. From surprisingly conscious to unbearably corny, this LP has its fair share of ups and downs.

The album covers a wide range of topics, from prescription drug abuse and systematic racism to beer bellies and mopeds. The album opens with epic choral sounds and Mack’s signature spoken word narrative flow. Haggerty describes the night that he won a Grammy where he beat out Kendrick Lamar’s seminal good kid, m.A.A.d city for “Best Rap Album,” a snub that once again reinforced how out of touch the Academy is. Mack ends the song, “guess I must explain, this unruly mess I made.”

Instead of explaining the mess, Mack opts to ride the 80s throwback wave Bruno Mars and Mark Ronson started with a coalition of 80s rap legends and a very, very poppy hook. Mack’s signature flows sound remarkably stale and it reeks of being a sophomoric attempt to recreate the success of “Thrift Shop.” Macklemore never strays from showing his inner cornball. From “the Penis Song” to “Spoons,” his immaturity on wax is often unlistenable.

The serious songs on this LP hit much better than those on his previous LP as Macklemore is directly involved in all of the topics he chooses to address. On his last LP, he sought to use his platform as a straight white man to save the gays, much like Hollywood’s propensity to tell the stories about minorities through a white narrator. However, on Unruly Mess, Macklemore’s conscious songs solely focus on things that he himself has struggled with. On “Kevin” and “Need to Know,” he addresses the issue of abuse of prescription medication, one featuring a stellar hook from Leon Bridges and the other featuring another notch on Chance the Rapper’s “great feature” belt. When Macklemore plays his cards right, his spoken word flow can be powerful. The epitome of this on this record is the closer of the album. On “White Privilege II,” Macklemore tackles maybe the most difficult issue that he’s directly been involved in. Providing a variety of accounts from white mom to #BLM protest. Clocking in at 9 minutes, it’s debatable whether this is even a song, rather than a platform for Macklemore to address his position and dispel the idea that he doesn’t understand his privilege.

The “fun” songs on this record are unwaveringly shoddy. Macklemore’s unbearable corniness is something his fans enjoy from him, however “Downtown” and “Let’s Eat” are unlistenable as a consequence of it. “Downtown,” the lead single off the record, follows the Bruno Mars trend of 80’s throwback and features 80’s rap heavyweights rapping about mopeds. It almost seems like an 80’s parody of “Thrift Shop” and if it weren’t for the over-the-top pop hook. The diamond in the rock of these “fun” songs is an ode to 90s rap named after Boot Camp Clik leader Buckshot. Mack raps classic Black Moon lyrics and shares the stage with DJ Premier and KRS-One. This song provides a narrative that a 90’s hip-hop head could relate to.

Ultimately, this LP is solid on the production front, Ryan Lewis delivering as always, but Macklemore struggles on the lyrical front to resist his urge to revert to his typical cornball self. However, Macklemore seems to be just content with making music for those who appreciate his going-to-the-beach-and-not-taking-off-his shirt raps, leaving his ceiling somewhere around this LP. If Haggerty ever chooses to shed his unbearably white, unbearable cheesy skin, he has the potential to seriously address a wide range of issues without discrediting himself with bars as profound as those of Sir Mix-A-Lot.