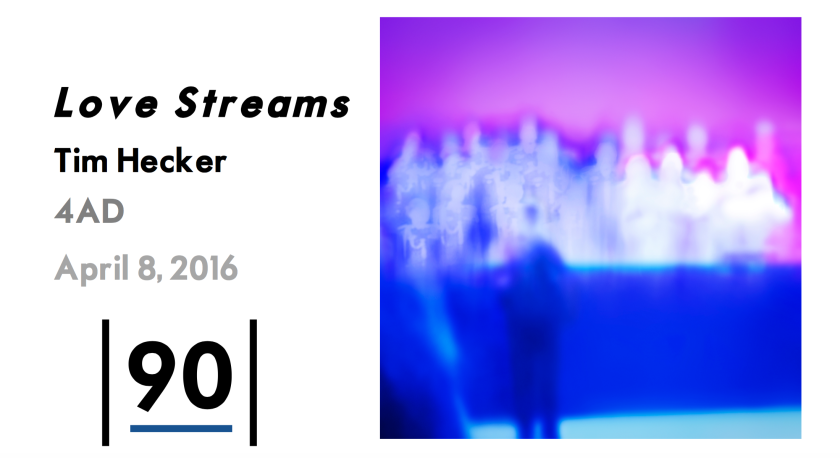 Back in 2013 Tim Hecker released his seventh solo album Virgins. Prior to this, his albums had always contained small doses of drone, noise and ambient music. His output was always something of quality, although it was often abstract enough that it remained underground. Virgins was different. From the opening track, “Prism”, it was loud, harsh and overwhelming. Focusing almost exclusively on live instruments rather than electronics, the pianos were copiously layered and melodies stretched on for multiple songs. Even the static played an important part in the melody rather than just assisting the atmosphere. It was his most epic and grandiose album thus far and garnered well-deserved universal acclaim. Yet it presented a problem for future projects. Once you have constructed an album of such grandness, where do you go next?

Love Streams is the answer to that question. There is no doubt that this album evolves techniques established in Virgins- the out of tune, glitched-out noise, the repetitive melodies, and the instinctive nature of the sounds. Just like Virgins, it feels like Hecker is performing right in front of you. It is all over the place and messy – yet it feels natural and organic. The difference here is the sense of epic-ness has been replaced with something more introspective. Vocals are now a presence throughout the whole album, but sometimes not in an obviously experimental way. Quite often they are presented in a standard choir, rather than the expected manipulation of other experimental acts.

It’s astounding to compare Love Streams to some of his early works, such as Haunt Me (now a fifteen year old record). Sparse ambient projects have now evolved into gigantic beasts, urging multiple listens just to comprehend the noise. It may seem redundant to be constantly contrasting Hecker’s works, but even compared to his contemporaries (Ben Frost or Oneohtrix Point Never), he is substantially unique. In this respect, it is necessary that his best comparison would be himself.

The opener to the album, “Obsidian Counterpoint”, is something unexpectedly different. While it might seem that Hecker had disregarded old-school synths on Virgins, he embraces them from the get-go here. Maybe they are not even synths or electronic at all; it would be reasonable to assume that these sounds are instruments or organic elements heavily manipulated. This track also has quite a few joyous elements (yes, you read that right)- it doesn’t begin as overly dramatic as Virgins or Ravedeath 1972. But as soon as this odd atmosphere is established, it slowly falls into Hecker’s more dramatic and comfortable sound. That’s not to say this sound is out of place…in fact it fits right in. Throughout the rest of the album, “Obsidian Counterpoint” is referenced. It shows up in the following track and in the closing track (albeit very faintly). In fact the closing track, “Black Phase” is audible in “Obsidian Counterpoint”. It reinforces the idea that every track is connected by many joints despite how disjointed some of them feel. Each new listen is like re-opening the puzzle box from a different perspective.

The second track, “Music of the Air”, does not cleanly embrace “Obsidian Counterpoint’ –  rather it arrives abruptly. It’s quite unexpected given how usually Hecker’s tracks evenly transition. But it also introduces the first vocal elements. It’s dramatic, fantastical and extremely ethereal. The choirs do an excellent job of contrasting these rough and convoluted sounds with larger than life human voices. Hecker recorded the eight person choir in a studio in Iceland- a prime location for the Northern Lights. It’s easy to see how this ethereal location gave Hecker supreme inspiration. The title Love Streams (and the art) seem like a very accurate description of these Northern Lights.

Predicting where Love Streams is going will be a natural reaction for any listener. As with any experimental music, a huge part is being surprised by unexpected detours. “Voice Crack” is possibly the most extreme detour on the album, where the vocals are accelerated and digested. The voices are distorted so heavily that it blends in with the noise to an acute degree. Even after several listens, it remains difficult to tell whether they are just the voices…or whether they have been incorporated with other effects or noise.

If there’s one criticism to give the project, it’s that an enjoyment of the record rely heavily on a subjective liking of the actual sounds. At one point amidst the album, there is a (seemingly) electric guitar (on “Love Crack”) playing that comes off as slightly distracting. It is not bad enough to objectively distract from the theme or objective of the album, but it harms the superficial enjoyment. Something that is extremely important on the first few listens of Love Streams.

The two singles off the album, “Castrati Stack” and “Black Phase”, are obvious standouts within the album, but a true appreciation for these tracks cannot be accommodated unless the rest of the album accompanies them. At times “Castrati Stack” has overwhelming bass and noise, as if every idea Hecker has is playing at once at the same time. Listening to small cuts of the album feels improper – Love Streams demands to be listened to all at once. It’s a storybook, and books are never read out of order.

If Virgins felt like death, then Love Streams feels like life – if life was a simultaneous experience of mechanical torment and joyous celebrations. Love Streams is an acceleration through human emotion, amidst the clutter, mess and shit of planet Earth. It might be odd to attribute natural connotations to Hecker’s music, but to not would be a misunderstanding of Hecker’s genius. There is no doubt there is significant darkness looming, but it’s also one of Hecker’s happiest albums he’s created. Hecker is streaming “love” throughout everything else.

It may be difficult to see Hecker as a monumental musical figure. Rough edges and accidental material are all usually strictly avoided in music as it brings forward the artificiality of its creation. But by turning it on its head, the clutter becomes a natural part what makes us enjoy it in the first place – making sense of what is essentially noise. Doing this also gives a fantastic metaphorical connection with our own reality. The hustle of the city and the drudge of everyday life are all incorporated with love and nature. Like the sounds, they are stacked on top of each other – a simultaneous experience of music; a beautiful mess.