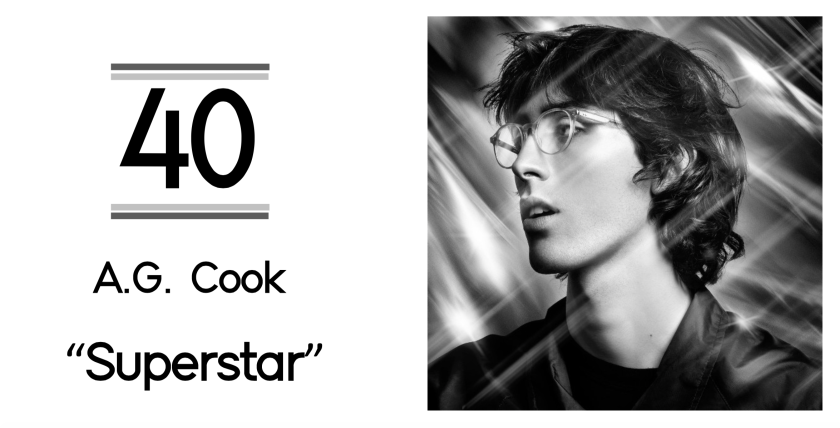 In PC Music’s takeover of the world’s alt-pop scene, they’ve carefully cultivated an image that could be compared to Hatsune Mike, the artificial program pop star from Japan. Hatsune Mike isn’t a real person, just an amalgamation of synthesizers and singing programs hidden behind the persona of a sixteen year-old girl. The artificial puppet strings that are simultaneously hidden and in the open make listening to “her” feel like living in the future. AG Cook understands this, and somehow evolves the process further with “Superstar”. The overly processed piano ballad with cascading “I know I’m going’ up oh woah oh” doesn’t attempt to hide behind anything. Instead, like skin ripping off an android, Cook reveals all with his falsetto evaporating into static filled yelps. The process of pop music imploding into a techno nausea is an interesting peek behind the curtain of electronic music’s blossoming label, and AG Cook provides a gleaming example as to why it’s so hard to break our gaze away from PC Music.  –T. Pennington 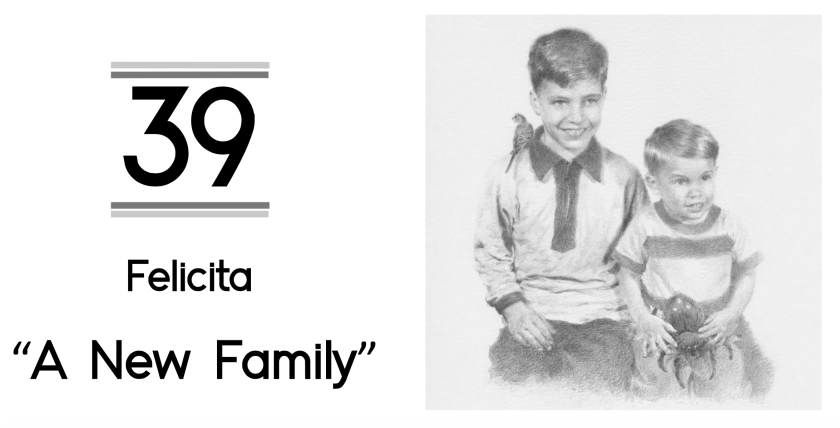 If PC Music were accused of being too artificially lifeless, too bubblegum pop, too sugary sweet, then this is the song to point to and say “Umm.” The vocals are still a bit artificially saccharine; I’ll give you that. But the synths, the drums, the inward-outward musicality of it all – the production packs a lot more depth and complexity than what we’ve come to expect. All of this is ignoring the obvious element that sets “A New Family” apart from the rest of the PC catalog: the influence of horror. The harsh screams and bits of noise that fluctuate unexpectedly make for a b-side of PC favorites. If the label has made a name for themselves in creating accelerated pop, then felicita is introducing them to the darker realms of power electronics, and they make that first step effortlessly.     – Zach W.

By all accounts, Bon Iver taking on the experimental realm should have been a masterpiece. Under the tutelage of Kanye’s autotune, 22, A Million should have been the dark, final piece in Bon Iver’s trifecta of emotionally wrought fragilities. Instead, he stunned only once this year: as a feature on Francis and the Lights’ “Friends”. The track hones in on simplicities, and that’s not a bad thing. Through watery, lite iterations of Autre Ne Veut production, Francis and Bon Iver (and Kanye for one line) make desperate attempts to bridge the end of a relationship by maintaining a friendship. “Just put your head on my shoulder” they beg, the autotuned distention smothering the listener in raw vulnerability. These moments of the past fly by until the track explodes in what may very well be the greatest climax of 2016. “Stay tuned in” echoes and fades, until Bon Iver gushes, “I will turn around for you”. The music explodes as the indecipherable vocals swirl about, rupturing into an electronic tide pool of damaged feelings and pleas.     – Zach W. 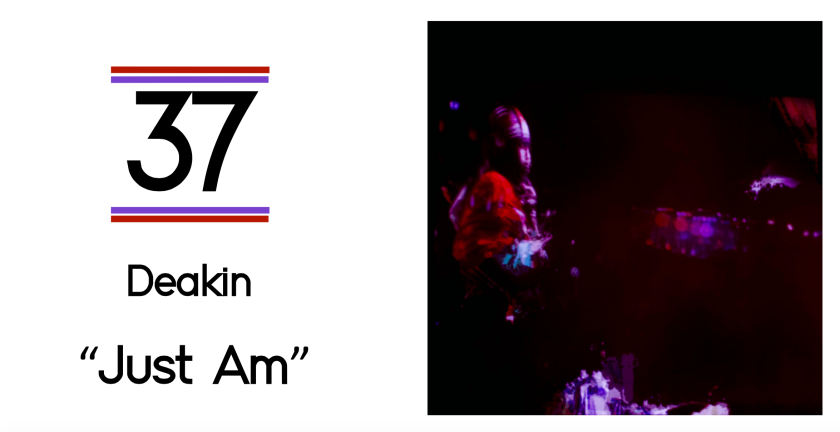 Deakin has always been a smaller part of something that is much bigger than him. He’s had to deal with being a part of one of the most important indie bands of the 2000’s and standing next to figures like Panda Bear and Avey Tare. His appearances on the album show that he needs time from a group as talented as Animal Collective. But “Just Am” is more than just a neat look at what Deakin does when he isn’t an instrumental member of the band. It’s insight into a person and psyche of a creative introvert. Surrounded by exotic influences and murky guitars ebbing back and forth, it’s easy to see why Deakin can feel lost sometimes. But his greatest gift is his transfixing vision; he maintains a skipping optimism, looking for the light at all times. Letting go of anxieties, getting lost in them, and receiving their gifts is more than he has ever done in Animal Collective, and shows how he is a figure as imaginative as they come.     -T. Pennington

Consider “ULT” to be a sequel. Not your average sequel, but one that builds on everything the previous iteration did so well. “Ultimate” was unretained and unrefined and unrelenting. It explodes and disregards safety. It’s a violent song. “ULT” adds a shiny new sheen to what “Ultimate” lacked. The violence comes with laser precision, and the victims of this new exactness begin to take form. The metallic beat adds a terrifying calm before Curry erupts on the hypocrisy he sees. His actions become clear. “Ultimate” shows its hand too early, but “ULT” maintains its anthemic trajectory and cements itself as the new theme song for Denzel Curry’s mantra: Unity. Love. Trust.       -T. Pennington

Before the final moments crackle and fall apart in a medley of screams and laughter, “Sick” offers a bitter outlook. “You’re the twist with no glitch” is stuttered out, an illuminating call-out over an already glowing bed of desolation. In typical Arca fashion, Wench captures a base emotion, wraps it in mystery, and splatters it across a façade. No two lines are ever uttered without a forced laughter blaring over the moody glitch-hop beat. “You’re so sick/You’re so sick” distorts clarity with its toxic undertones of betrayal and disgust. But when the tears start to spill over, Wench puff their chest out, refusing to let anyone else feel the pain.     – Zach W. 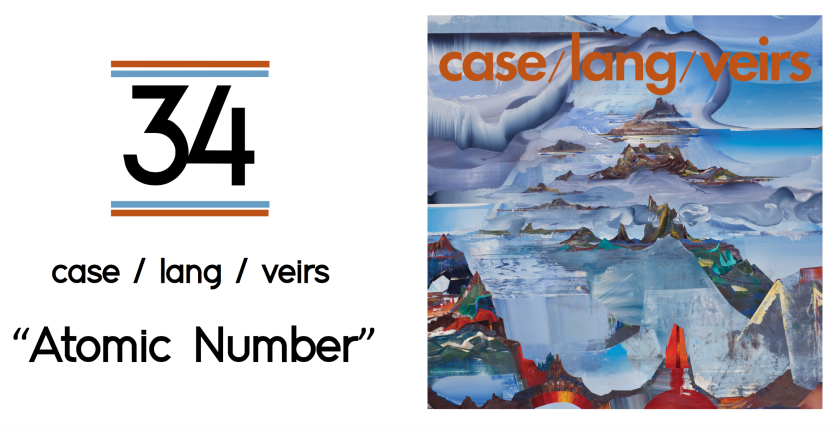 Combining the mood of Fleet Foxes with the approach to delivery of the Beastie Boys is a bit of a conceptual anomaly. It shouldn’t work. But through the natural, glimmering cadences of Neko Case, K.D. Lang, and Laura Veirs intertwining their perfect voices into one-third lines and surging choruses, it does. Metaphorically, the trio beautifully traces the search for identity amongst feminine communalism. This unending search comes from the desire of implicit perfection, stemming from within, projected outwardly. Truthfully, I’m not sure whether their statement is one of endurance or of irony – in that the search for identity is told in 1/3-phrases completed by one another. I just know these three women, together, can ebb into a soft discourse on anything they choose and it’ll always end up sounding gorgeously natural.     – Zach W.

Something about Arca’s music is undeniably uncomfortable. Sexual and violent. The 3D rendering of the album covers he’s put out with Xen and Mutant  are glossy, human-like that has malformed into an erotic uncanny valley. But “Sin Rumbo” takes the innocence of intimacy and forces it into a nightmare. The lyrics translate into a story of pain in trying to be close but maintain an aimless distance. But you don’t need a translation. As Arca slowly gasps out the word, the fluttery, artificial strings are choked back with a punch. Restrained. The song feels bruised up until the final moments where cries are shouted out, horrifically. They are not gasps. They are spiritual wailings that feel like whispers in your ear. It’s as painful as any noise he’s ever created. And with pain, comes the unease of witnessing pain.     – T. Pennington 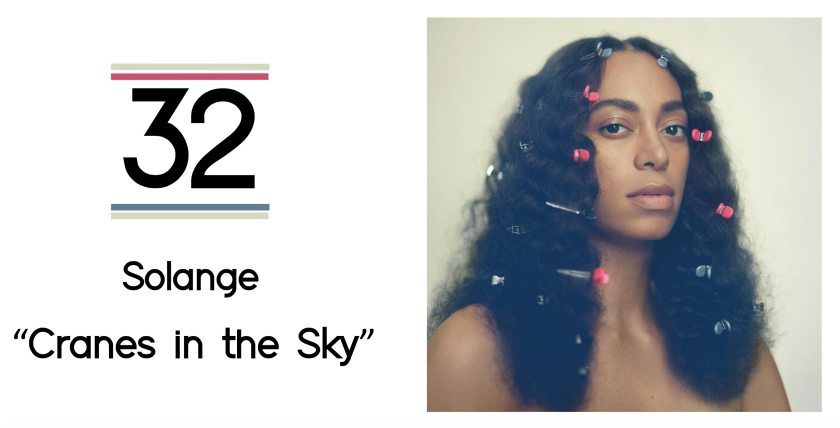 Unfortunately, we aren’t Solange. We will never be her or witness her experiences. But we have the second best thing. We have “Cranes in the Sky.” A song that is simultaneously a poetic embrace of individuality and a showcase of the ubiquitous nature of Solange’s music. The pain that brought her here, such as suffering racial abuse at a Kraftwerk concert, will never be experienced by us. But the ability to illustrate an emphasis on a healing empathy connects to us on a human level. The soft beginning of bass and various strings burgeons into a heavenly escapade of escapism. We have all pushed the world away, and articulating that into a glorious ballad of self empowerment secures itself as a vital piece of art in 2016.    -T. Pennington

Chromatics have spent their career perfecting what it means to be cool. Kill for Love acted as an unofficial Winding Refn soundtrack, chugging along in dreamily electronica fashion. And for years now, we’ve been promised the forthcoming album, Dear Tommy. The title track is now the fourth single to be released from the album (slated for a 2017 release), and it’s the best yet. Most of Chromatics’ music has been calculatedly perfected for midnight drives to nowhere in particular, and “Dear Tommy” is no exception. But where “Dear Tommy” separates itself is in the vocal breakaway and the crushing instrumentation by Johnny Jewel that grows more powerful every minute. It’s oddly breathless, dazedly becoming more and more penetrating. This probably isn’t Chromatics at their coolest, but it’s certainly them at their sleekest.     – Zach W.