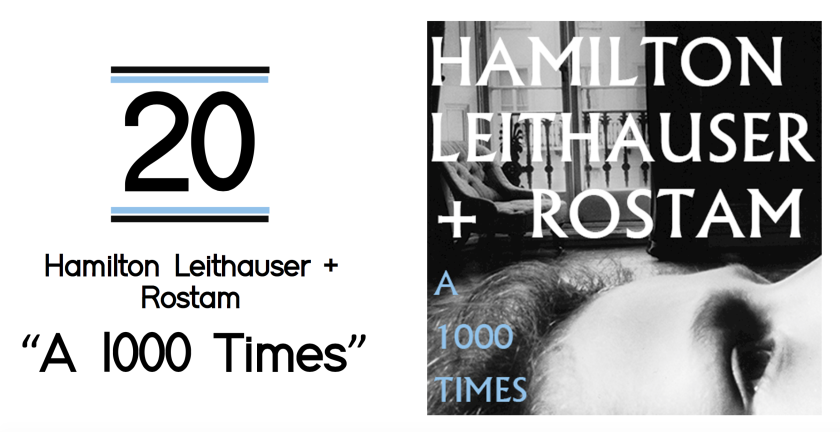 Rostam Batmanglij has, in the past ten years, shown us that pop music is an open playground where any idea can be explored with unabashed enthusiasm. His work with Vampire Weekend has clearly exemplified this, spanning world and afro-beat in a mode that contains its brilliance in the field of pop music. But with Leithauser’s raspy conjuration of oldies stations, it’s clear his focus has shifted. Using an upbeat rockabilly aesthetic, Leithauser pens a poetic love-letter to a person disinterested. The only way to pursue this unrequited love is through a dreamy landscape of romantic idealism. And sometimes the best way to pursue these dreams is through the past, where everythings is brighter, bolder, and more evocative than the present. The same way Rostam evokes the past with a lens that embellishes the beauty, Leithauser croons of our dreams and how they are the safest space for our future.      -T. Pennington

Can I just say that I’m already in love with 2017? Everything feels new and expansive, like an indestructible horizon. Nothing has changed, and the doom from 2016 will most likely follow, but why can’t we love the seemingly new things in our life? We know things aren’t great, we don’t need to talk about them. Crying understand this. They eschew negativity in a way that doesn’t idolize false hope, but sentimentalizes the now, the presently new. We’re in the early stages of our relationship with 2017, but I’m going to hold on to these revitalizing feelings. I know they won’t last. I know I won’t last. But with “Revive”‘s rainbow guitar solos and measured hopefulness, at least I can revel in the now. And hopefully the gleaming power of Crying can make this last. Like a first kiss, but forever.    -T. Pennington 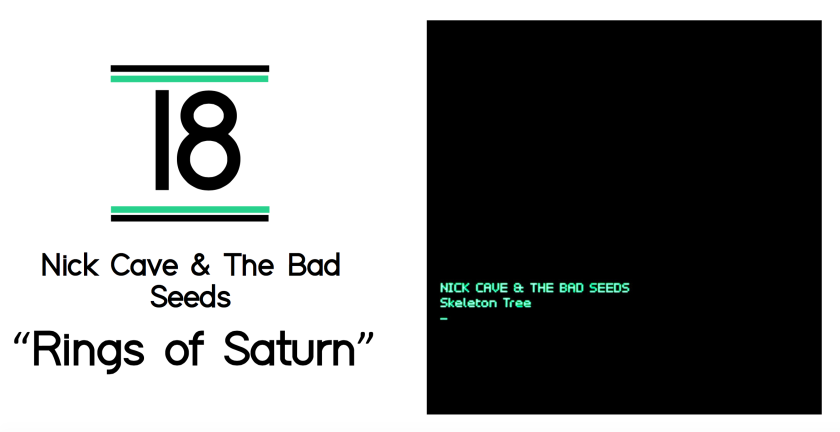 Skeleton Tree put its big, dark lens on death a lot, mostly in amendment-fashion regarding Nick Cave’s son. But “Rings of Saturn” diverges. Astral sprinkles of synths firework over lo-fi drum smacks, perfecting the glitch-gloom Cave so desperately strived to capture this year. And despite the themes of passionate love, the imagery is nothing but ethereal and vicious, a lover described as a funnel-web poisonous spider and a stinging jellyfish. It’s moments of beauty, spellbound by venomous eroticism. But at the end of it all, it’s rendered inescapable. Time and time again, Cave returns to the affirmation “This is the moment/This is exactly where she is born to be”. There’s safety and laxness in believing in fate; Nick Cave seems to spin back towards it time and time again.     – Zach W.

Danny Brown has always had a natural bravado in weaving together snapshots from his youth. Together, they tell the tale of growing up in Detroit, of living in a city paralyzed by violence, indecency, and hate. The self-proclaimed “murder music orchestrator” has operated in hip-hop as a sort of narrative figure, where others rap from the inside out, taking firsthand experience as drug pushers and gang members and exploiting those stories to create music. Danny seems plagued by these memories, haunted by a past he cannot escape. Even now, at 35, having long survived it, he can’t seem to shake identifying with “Ain’t no water, how a flower gon’ grow?” On “When It Rain”, a moment of comparative clarity from the unhinged Atrocity Exhibition, Danny doesn’t rationalize his upbringing or glorify the City of Boom as something that made him tougher, made him stronger. Instead, in traditionally berserk fashion, Danny vilifies his hometown as a black hole of morality, the kind of place that forces people to rob their family to survive, or where you count your blessings to waking up hospitalized, knowing full-well there was a chance you might not have woken up at all.     – Zach W.

Lil Peep is the kind of artist who could only blow up now – a post-Yung Lean landscape of hip-hop where Soundcloud can just as easily propel someone to fame as signing a major record deal did years ago. The independent brand of sad boy, goth-hop is not new to 2016. What is new is the approach Lil Peep has taken on “Kiss”, both in terms of his catalog and the #depressed music scene. The track is a fuller, deeper take on his psyche compared to his past tracks, as well as exploring the musical bounds Peep – and by extension, the gloomier side of emo rap – can reach. “Kiss” exists in two parts – one, the hazy, half-sung, half-rapped blow lines, and two, the anthemic plea to be kissed before being killed. It’s a divisively split approach, Lil Peep opening with the romantic, “Nobody knows the me that you do” and closing with the morbid, “Imma die young/Baby, Imma get killed”. He traces heartache through the eyes of a coked-out, self-medicated loser. But the pop-punk-meets-hip-hop approach stuns as a perfect vessel for the immature, the loveless, and the longing.     – Zach W.

No matter what side of the political spectrum you identify with, no matter who you wanted to win the election, and no matter you musical taste, after the 2016 election, there was tension. Thick, potent tension. And when SNL premiered the live premiere of “We the People”, the realities of a huge group of people was felt simultaneously around the country. A Tribe Called Quest used their endless energy to idolize the late Phife Dawg and instill the mood of milllions into an even larger group. Racial injustices were laid out with an almost depressing simplicitiy as a siren alarm compounded the classic, jazzy drums of Quest. What was initially a dystopian fear became a reality for millions of people on November 8th. A Tribe Called Quest happened to create a song that resonated with a lot of fear, connecting the dots on a lot of issues, and unifying a lot of people who feel oppressed. All the “black folks”, “poor folks”, “Mexicans”, “Muslims and gays” that witnessed this performance, or even heard this single, could immediately feel a sliver of hope amidst nationwide terror. No matter your opinion, A Tribe Called Quest’s ability to do this in one track invigorates their legacy for a new generation.   -T. Pennington 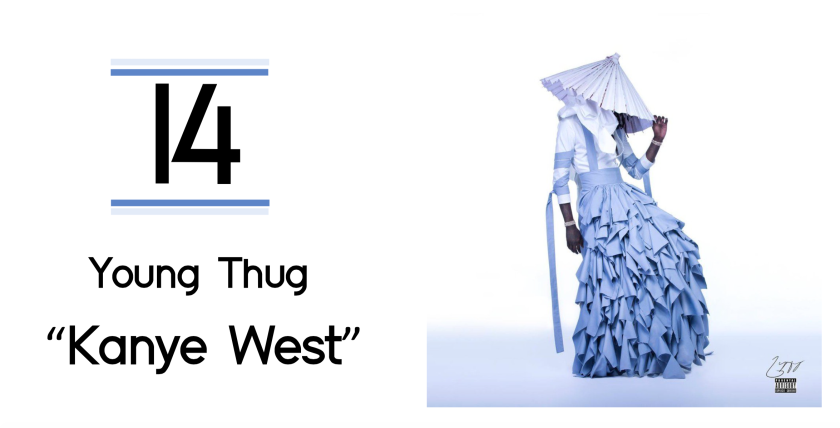 Let’s count the amount of name changes this song had to go through. First, there was the release on YouTube with the title “Elton John”. Then, “Wet Wet”. Then, “Pop Man”. These changes came after the rollout of his new name “No, My Name is Jeffrey”, which he shortened to Jeffrey? Regardless, the first output we received following the Slime Seasons showed true metamorphosis, layering his silky production over calypso stylings. Along with contributions from Wyclef Jean, the cosmos aligned for a huge step forward for Young Thug. Pianos roll and vocals rock back and forth. All while Thugger provides a sexual and personally gratifying peacocking, flaunting his new style with an infectious hook. If every new single was as subversive as this sudden wardrobe change, Jeffrey could soon cement his status as hip hop’s new chameleon.     – T. Pennington

Ghost are an evolutionary band. With every release, they’ve made certain to change their identity. In part, this has been easy due to the retirement and emergence of Papa Emeritus I-III. Musically, they’ve made an effort to change their sound on each album. From Opus Eponymous to Meliora, there’s been a noticeable increase in personality, an increase in self-awareness, and a decrease in the “heaviness” of their unique take on heavy metal. After Meliora, their best and least metal release of all, all signs pointed toward lightness. With “Square Hammer”, those suspicions were confirmed. It smacks away with crisp snares, organ-like synths blaring atop snarling guitars that pummel down. Papa Emeritus III beckons attention with his oft-surprisingly soft delivery, coolly asking, “Are you ready to swear right here, right now/Before the devil?” The chorus explodes with Judas Priest familiarity, towing the line between heavy metal and glam rock (now with a dash of gothic pop accentuation). When the chorus hits, Ghost doesn’t conjure images of pentagrams and satanic worship. In 2010, that would have been true. Now, they offer an empowered hand thrown in the air, an icon to a sea of fans straining their vocal chords and banging their heads away, their leader offering a subtle wink in return.     – Zach W. 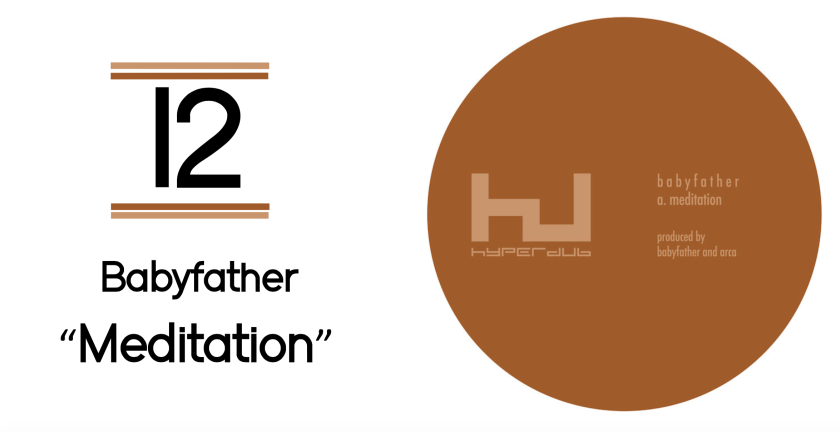 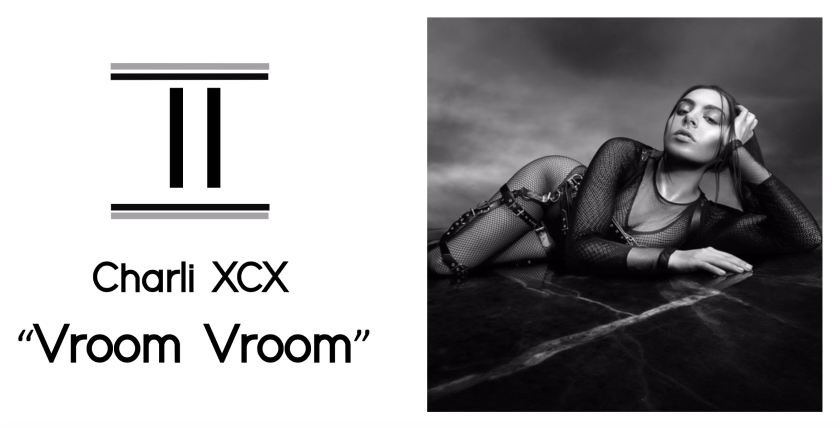 There is a huge dissonance in what Charli XCX is saying with “Vroom Vroom” and everything she has ever done. In 2014, she was collaborating with Iggy Azalea and having a monstrous year with her breakout top-ten single “Boom Clap”. Two years later, the fans she probably gained through that run, were given this EP. The title track offered before the release aggressively erased her status in the mainstream, while maintaining her core subject matter. The song indeed is about cars, the beach, driving, and combining that into a sexy catwalk event. The song, however: violently unsexy. Dusting off its shoulder with gritted teeth and sheet metal percussive blows, SOPHIE delivers a song that assaults with its coolness. It makes sense; Charli XCX has been forced into the shadow of her pop colleagues far too many times. “Vroom Vroom” showcases that she has waited far too long to sacrifice what’s due to her, and the industrial backbeat will provide her the strength to become a pop phenom.     – T. Pennington