2016 will be remembered as the year of destruction: the death of icons, the breakdown of political decency, and the corruption of societal values. The narrative seemed cemented before the year was out. But let us be clear in saying, musically speaking, 2016 was phenomenal. One of the best in recent memory, in fact. Creating this list and finalizing fifty albums worth remembering proved to be more daunting than anticipated, but we’re proud to present our selections for the greatest releases of 2016.

Total transparency: emo is one of those things in music I really root for. I want to see it succeed. This fourth wave of emo is making that difficult, but I digress. Emo, and to a lesser extent, post-hardcore, brings with it a kind of musical allure that’s difficult to articulate. It’s a highly personal experience that tends to fracture when vocalized. That sort of rift has been brought up a lot here at HQ, but alas, Stage Four seems to be one of those emo albums that extend beyond just being emo. It tackles the tropes while moving beyond, their inclusion more a check-off of the genre and less a product of the band’s desires. But even so, this is an album whose inclusion may forever be hotly debated for us – but then isn’t that what makes it so important?     – Zach W.

The most exciting thing about clipping. is their attention to detail. The sounds explored by Jonathan Snipes and William Hutson are textured to the minute detail, savoring moments that most noise artists will crumble into a collage. And Daveed Diggs’ use of slam poetry lyrics often overindulge in a vocabulary that’s tightly wound and somehow fluid. But this also yields albums that have felt like wasted potential. Splendor & Misery efficiently provides a purpose for clipping.’s work. The audio narrative of a slave uprising on an intergalactic ship provides an eerie backdrop for the soft hums and echoing vibrations that resemble ships shooting into the unknown. Diggs’ rhyme pattern bounces around like an internal monologue driven to the brink. With nothing wasted, they create a story that indulges in their idiosyncrasies. Following the emotional turmoil of this space opera is as enjoyable as clipping. fulfilling their sonic meticulousness.     – T. Pennington

It’s hard to stay pretty when in a frenzied state. It’s even harder to stay calm when someone put you in that frenzy. The punk rock trio of Mannequin Pussy have illustrated this with Romantic. With a runtime of 17 minutes, the whirlwind of styles and tonal shifts all collide in an attempt to maintain themselves. But the enjoyment of Romantic is seeing this plan ultimately fail. Rapidly, hazy screams become unintelligible as quickly as tension evaporates into a jangle-pop peace. Every genre pivot is an attempt to fully feel whatever emotional breakthrough is occurring. No, this record isn’t groundbreaking, it doesn’t invigorate punk styles into new territory. Instead, it tells a short, multifaceted story about dealing with emotions. The pretty ones. The ugly ones. The real ones.     – T. Pennington

Anyone who ate up Emotional Mugger clearly missed out on Muuy Biien’s Age of Uncertainty. The grimy garage rock/droning post-punk sound was surprising for the Athens band, most especially given their history of indulging primarily in ambience. But what’s possibly more surprising is how nuanced and subtle they handle the newfound sound, as if the band has been exploring the realm for as long as “Preoccupations” had when they made last year’s exceptional Viet Cong. And while Age of Uncertainty is, at times, a little all-over-the-place, it’s the result of a band with so many ideas and so many influences that they haven’t yet figured out how to properly condense it. Given how competent a record this is, there’s little doubt they’ll figure it out soon enough.     – Zach W.

“You start going backwards now” is as good a summary for Split EP as there can be. The two independent artists are fledgling reminders of a blurry musical past, creating some of the most lo-fi music to exist during a time where production is at its cleanest. At its core, the EP is youthful, earnestly straightforward in its design, reminiscent of a spirit that’s been somewhat forgotten now. The Loner(s) and Drive Me Home Please both drearily find comfort in themselves, making it cool again to embrace your defects. And despite moving backwards, sometimes breaking down in times of indignation and dejection, the two’s accompanied isolation is always forward moving.      – Zach W. 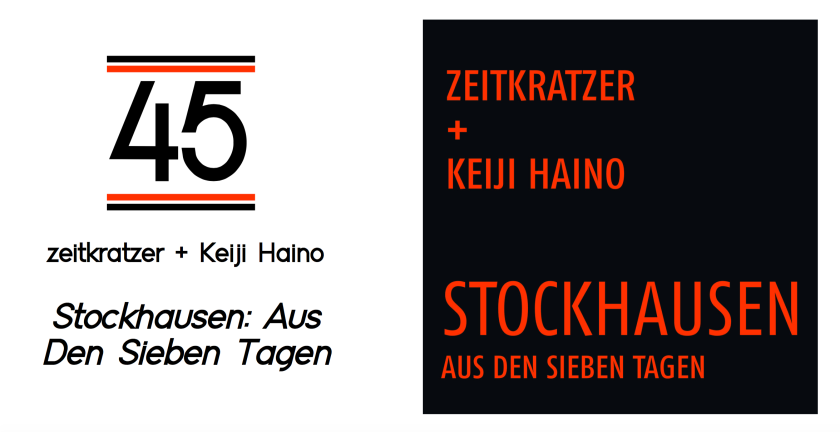 2016 is going to be a year of many things, but musically it cannot be denied that there were a few trends that reoccurred more often than before. The one that stands out the most seems to be the self-imposed constraints that artists follow. Matmos released another work of process art, this time with a washing machine as the focus. Xiu Xiu released an album of covers, however these covers were of a soundtrack. Even Ghost covered songs outside their wheelhouse of influences. Perhaps the strangest of these is Zeitkratzer and Keiji Haino’s Stockhausen: Aus Den Sieben Tagen. These “covers” all interpret the music theory and philosophy of Stockhausen, that reads more like religious texts of a simplified monastery rather than music theory. Commandments are given to view performances as tests of endurance, strength, and will. The result of combining Haino’s vocal power with these tests of Zeitkratzer’s prowess as an ensemble are staggering. The rattling strings and guttural vocals explore the depths of the mind and are a religious experience that is specific in testaments, universal in delivery.     – T. Pennington 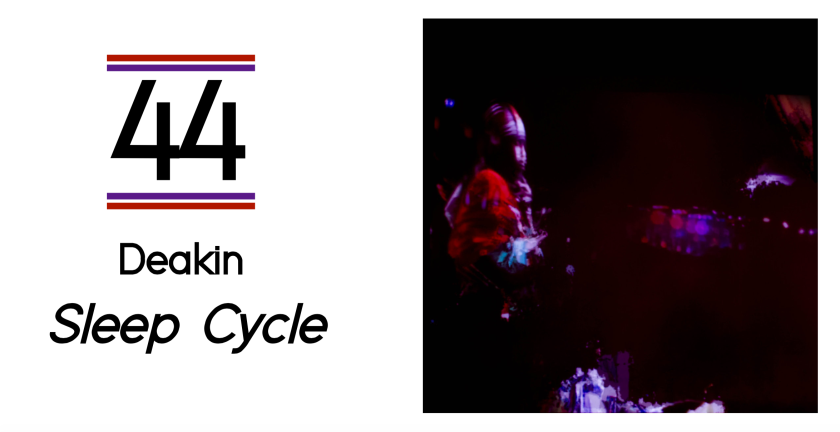 This year’s Animal Collective record was disappointing. A sanitized noise-pop album full of ideas that felt like grasping at straws. Forcing in effects and samples in an unnecessary, lifeless manner. Which is what made Deakin’s first album, Sleep Cycle, such a moving surprise. “Simplify, define your goals, and watch them grow” becomes a motivational guidepost for the record. The guitars glow with each note and bring out a naturalistic healing sensation with each minute. Sleep Cycle is an album about healing, growing, finding the therapy that works for you and pushing for it. It passes through abrasive collages, moody meditations, until finally arriving at “Good House.” A song that banishes fear and confirms in Deakin and whoever listens that feeling strange is okay, as long as we breathe in, breathe out.  This album wasn’t meant to compete with Animal Collective, but a record that replenishes and revitalizes the basic forces of life are almost a contrast to the modern records of the band’s discography. But Sleep Cycle amends that even in turmoil and dark phases, all will be alright.     – T. Pennington

Moth exudes sweetness. Not in the way that bubblegum-pop can get cloying, but in the way that you can tell it’s a labor of love. Opener “Look Up” gives some false pretenses and inclinations about what’s to come. No other track has the tribal influence of the first track, but then every track comes with its own identity. “Romeo” tears away pavement as it glides by. “Crying in Public” is a crystalline emotional breakdown, giving beauty to losing composure. “Unfinished Business” erupts as Moth’s emotional cocoon shatters, no longer hidden by colorful instrumentation. All that remains is Caroline Polacheck’s unhidden, proud purity. And it’s hard to view this purity in a vacuum, or at least maintain the feeling it gave upon release. Now, knowing that Chairlift intend to split up, Moth being their last record, the climaxes and bouts of delicacies are elevated far beyond their original intent.    – Zach W. 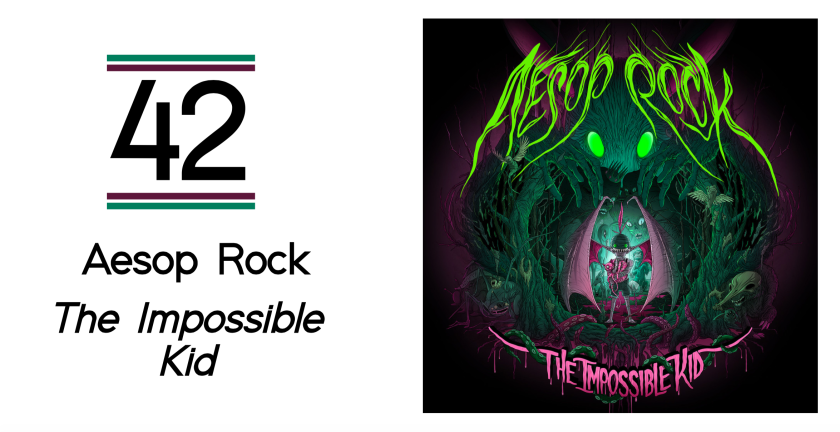 When we started this website a year ago, the goal shifted constantly. It was impossible to settle on a philosophy that worked for us, which can be seen in our early reviews. Some popular indie artists were fought over for weeks. But after a few a months it became clear that our mindset should be rooted in the underground, whatever that means. Hence, the basement in Basementality. Aesop Rock and The Impossible Kid seem to share our mindset. Keeping the production a combination of old-school approaches with psychedelic flourishes, Aesop Rock creates songs that are buried behind daedal rhymes and tangled phrases. It requires work to uncover the meanings behind the songs, even ones that are simple excursions through life, but enjoyment exists at any listening level. But that’s the magic behind The Impossible Kid: mind-bending music that gives you as much meaning as you’re willing to work for.     – T. Pennington

When you look at the cover art for Only the Youngest Grave, you may be inclined to think, “I’m about to listen to some of the nastiest, most vile sludge metal in years.” Or maybe, “This album is gonna blow my mind with how painfully noisy it extends the power violence genre.” What you should think is, “I’m about to spend nearly two hours listening to what can only be described as the mental soundtrack to the documentarians in The Blair Witch Project“. Lost Salt Blood Purges spend their double album exploring the extent of tape music, droning loops, tying it all up with a ritualistic burnish. “The Spirit Meets the Skin” is a mostly ambient piece, but the hand drums that patter about throughout are sickeningly off-putting. It’s calming; trance-like. Broken up into three distinct “chants”, Only the Youngest Grave is as folkloric as it is nightmarish, a misleadingly tranquil haze of peaceful reluctance. It’s something that can’t be fought, turning the black-magic stupor into one of deadly submission.     – Zach W.