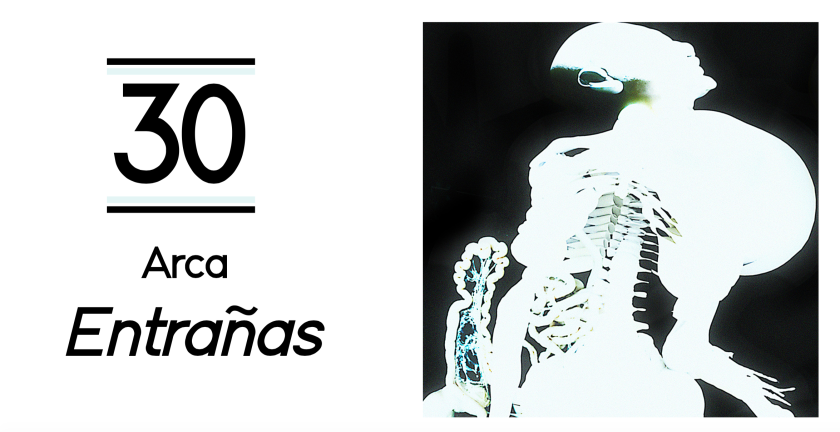 Girls can wear jeans and cut their hair short, wear shirts and boots, because it’s OK to be a boy, but for a boy to look like a girl is degrading, because you think that being a girl is degrading. But secretly you’d love to know what it’s like, wouldn’t you? What it feels like for a girl? Chaos erupts, set ablaze by fractures of noise and samples, warped beyond recognition. Flashes of coherency blind before you can make it out. A melody? A rhythm? Too normal – cut it short, distort it, manifest it in mayhem. Is there closure, a light at the end? No, but there are fireworks – a symbol of independence, the cannon of freedom, closing a frenzy of anti-liberation. Is it a glimmer of hope or a jaded dream of a realized impossibility? Arca sings, the first time in his career, of how aimlessly he walks.     – Zach W. 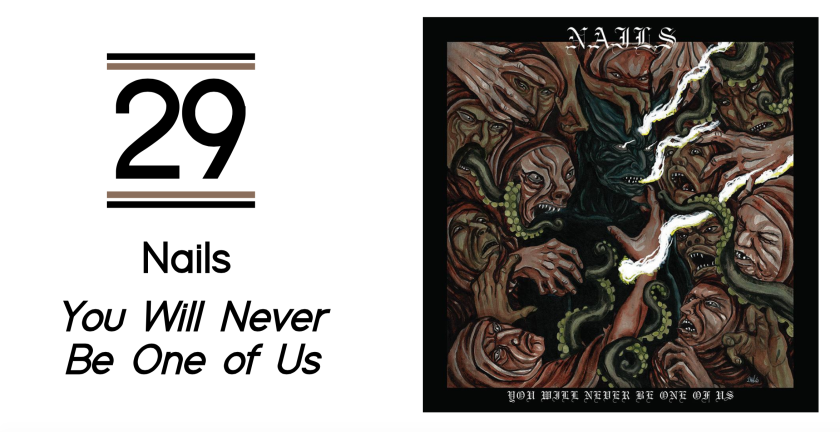 Since their inception, Nails have had an unparalleled grip on the throats of the metal world. Nothing even comes close to their raw, dominating sound. It’s a harsh fury that soundtracks the the gap between a violent life and a violent death. But for the first time, a target had formed, a victim of their anarchy. It isn’t specific, just “you”. A distinction between the ingroup and the outgroup. But through this divergence, a greater intensity forms through conceptual awareness. When pummeling blastbeats collide with dirty, chugging riffs, it’s clear this aggression is meant for someone. It’s a disgusting, visceral turn for Nails. But the payoff is enthralling; snarling phrases are spit in the face of the world. The 8 minute finale features a sense of doom and discord as the guitars wildly raze away. They have always followed their own path, now with others encroaching on their territory, Nails have provided a brutal response to those they deem unworthy: You Will Never Be One of Us.     – T. Pennington 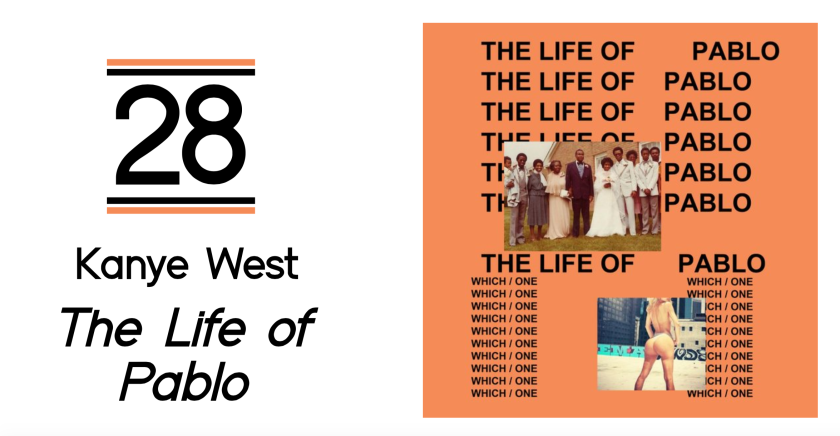 Kanye West’s seventh full-length was the most stressful album rollout in recent memory. Seemingly birthed from stumbling blocks, The Life of Pablo was constructed out of empty promises, half-intended singles, and the public viewing of a musical demagogue slipping further and further away from sanity. Promised to be the Album of the Life, The Life of Pablo is resoundingly splintered; a haphazard train wreck of sounds and influences, of surface-level indulgence and emotional sincerity, of Godly benevolence and smiting hostility. But it works. In the narrative of Kanye West, a cataclysmic near-failure is, in retrospect, the best and most natural next step.     – Zach W.

Wake up. Rather, hop out of bed, skip down the stairs in your zip-up flannel pajamas, and eat a big plate of waffles, bacon, and buttery scrambled eggs. Today’s a big day, and that’s wonderful. Truthfully, everything is wonderful. On Bonito Generation, the mundane is amazing – the amazing, spectacular. Anything can be transformed into a gleaming ball of color when gorgeously crafted by Kero Kero Bonito. Trying to figure out a song on the radio is transmogrified into a day’s event. The overwhelming feeling of living in a big city doesn’t exist, not when you take life in your own hands (things turn out alright). It all smears against your ears in a frenzy of vibrancy, like a kindergarten finger-painting. Everyone’s trying to be smart with their music, always having the forward-thinking, ironic sentiments, but singer Sarah Midori Perry explains, “Sometimes if I think too hard/I forget that I’m a superstar”.     – Zach W.

There is nothing to say about this album. There are only facts. There are eight songs, recorded sometime between 2013 and 2016 with a portion of them being performed live. There is no art to represent the collection of songs.  Many of the songs feature Terrace Martin producing dark, introspective jazz motifs that appear more than once. Many of the songs are unrelated, featuring only cosmetic similarities. Features include Jay Rock and CeeLo Green. There is very little here that should make it good. They’re leftovers. They’re b-sides. But for some reason, Kendrick Lamar turned it into a collection of exceptional songs that don’t need a message or a narrative. These songs would function as filler for To Pimp A Butterfly, but here they exist without the need to piece together a bigger picture. There is no story about a kid growing up in a devilish environment. There is no story about maintaining identity in a system built to destroy it. There only exists these songs, high in quality, that cement Kendrick Lamar’s talent as an artist.     – T. Pennington 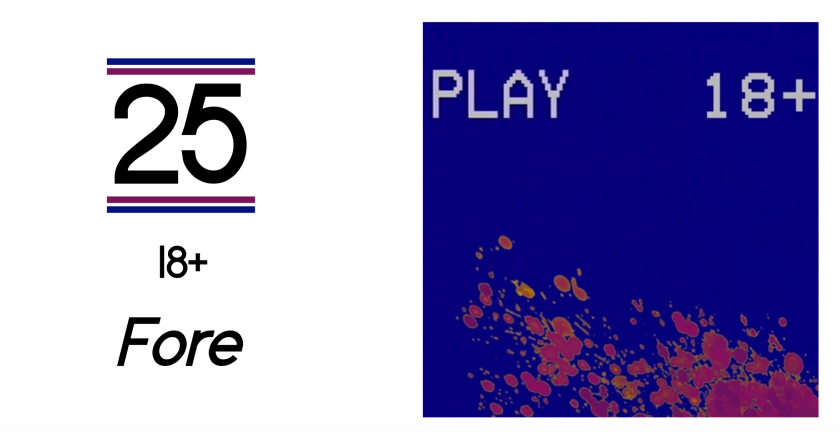 Fore is immediately gone. It was never really here. As far as I can tell, it exists only as one play-through on YouTube and Houndstooth’s SoundCloud. 18+’s Bandcamp makes no mention of it, and their iTunes page only has one release – Collect. There’s no physical release, no way to permanently hold onto the record, at least legally. For a group that’s already so shrouded in mystery, this tape seemed destined to be unheard. But this undiscoverable nature took away any inclination to prove anything. 18+ was granted what so few artists are given: complete freedom to explore without a future expectation from an audience of fans and critics. In this way, Fore is post-music, a sort of freeform collage of piecemeal pop that purges the duo’s inner-desires outwardly. By barely releasing what can only be described as their most experimental, blissful collection of tracks, they’ve at once preserved their underground presence while sharing it with those who were bound to find it anyways. Fore, in essence, confounds in ways its creators might not have even intended.     – Zach W.

In Danny Brown’s universe, the force that exerted the most pressure on his life has always been himself. The pressure to succeed critically, chisel a legacy beyond fame, and be remembered, is essential to him. He compared Old to Radiohead’s Kid A, and with his fourth album, he titled it after the first song of Joy Division’s final album Closer. These are brash comparisons, and it’s finally taken a tole on his psyche and his work. Atrocity Exhibition is a splintered mind, bursting at the seams with maniacal flows and bizarre beat choices. The opening track tumbles into his demented ego, beginning a scorched path to success or Hell. Blaring post-punk influences oddly illuminate the tracklist, each feeling like a fraction that makes up Danny’s persona. They’re oddball, funny, paranoid, serious, irrational. No longer can Danny Brown make an album neatly separated at the halves; every song features a twisted grin in the face of a grim and horrifying reality. Even if self imposed, the pressure on this album is strong enough to craft a raving genius.     – T. Pennington 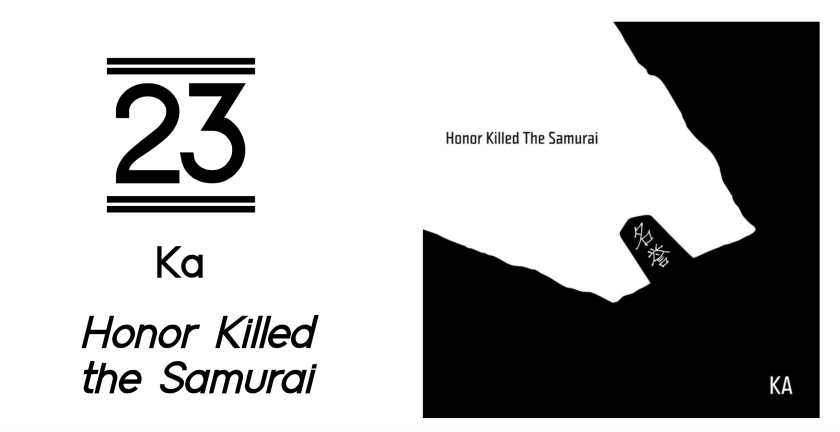 Honor, while conceptually rooted in how society defines it, seems to be a staple of humanity. No matter where you look, it seems to be ubiquitous, no matter the time period or geography. Looking back, it’s obvious that Ka has prided himself on his strict adherence to this philosophy. His philosophical austerity projects a worldview of being respected for his prowess when rhyming. But I would never have called Ka’s music beautiful. It’s gritty, hardened, almost silent. Honor Killed the Samurai is different. Paralleling his work as a simple man to that of a traditional samurai, Ka finds beauty, not nihilism, in fulfilling this role. Simple guitar melodies, chimes, and strings, appear and disappear. Ka’s world was always deadly, but for the first time Ka seems to accept this, and channel this into a zen elegance.     – T. Pennington

Ever since the conscious uncoupling of musical partners Dean Blunt and Inga Copeland, their directions have been strikingly different. Dean Blunt went into hazy narcissism. Inga Copeland has revised her persona into a cultural tourist. Gazing into the odd and often humorous output that is the urban sprawl of Europe, Live in Paris imbues an augmented reality to the complexities and experiences found in her travels. The clocktowers ring ad infinitum, walking through the street is like a game of monopoly. Except the all too real threat of imprisonment is pervasive. Synthetic devices strut and openly mock the tyrannical society. It’s exuberant in its display of wonky electronica, self aware in the danger it’s in, but able to relax in a much more stable fashion.     – T. Pennington

Brood Ma – our maniacal maestro of militaristic glitch-beats. The unseen orchestrator of the game we’re cast into. One of political aim? Of survival? Of pure digitalization? Irrelevant. What matters is the forecast of what’s to come. No breaks. All adrenaline in DAZE, flying by in spazzed out shots of sweat-induced nausea and fear, the readying. Breathe it out, but the droning drones on. No breaks. A percussive rattle of imminent death; of looming destruction. What’s real? Sacrifice yourself – for what? Is the moral high ground a greater substitute for life or is it more of the same? A part of the DAZE of it all. No time. End it.     – Zach W.