Pop music has been on a crash course for sonic singularity for the better part of the 2010’s. Formulas, textures, and structures are cycled in and out and its hard to even discern a producer’s work when every song has a shared identity. You could probably thank Jack Antonoff for this when his work could be found all over the singles of 2017, but I think it’s better to appreciate the best of what he’s done than harp on the negatives. And “Los Ageless” is absolutely one of his best, thanks largely to letting Annie Clark have full creative control. With her new wave indulgences and flashy guitar work, the song becomes an anxious and mechanical creation. Musing on the psyche of someone who has loved and lost and lost their mind, Clark fuels a fiery synthetic storm of emotions. “Los Ageless” makes love sound sick and makes being lovesick sound sicker.

“Mask Off” is Future in the pocket, deftly emphasizing his dominance over the Atlanta rap scene. Codeine and pills and controlling his lane is something does best, and it’s no wonder that another one of his anthems is as potent as it is and fits perfectly on an album titled after the star. But the real star of “Mask Off” is Metro Boomin. Flipping Carlton Williams’ “Prison Song” from the Selma soundtrack, Metro Boomin not only rivals Madlib with his skill as a sampler but created waves of copycats with a single flute. “Mask Off” is Future and Metro subtly transforming trap music into an art form whose peak was reached in 2017.

Only songwriters who’ve reached a certain height in the pop music stratosphere of can make a statement as bombastic and powerful as the one made by Harry Styles on “Sign of the Times”. Cradling sympathy and emotional longing, the piano ballad continually soars upward through multiple climaxes, without ever losing momentum. This is a song that has clearly been building internally within Styles for years. Having been on hiatus from One Direction for about a year, there’s been little time for maturation. However, the way “Sign of the Times” emerged fully realized and fully divorced from the boy-band pop of his past, this single reveals the depth that was latent in his early career and the powder-keg of songwriting tricks that Styles has concealed throughout his lifetime.

What if all romance in the world was an illusion? What if everything beautiful in this world we craved was simply just a craving for an idea? That nothing can match that first feeling of sublime joy that we felt when we were in awe of the magnificence and grace of this world? Fleet Foxes’ primary songwriter, Robin Pecknold, has been a writer who sees  real love in the natural curvature of the Earth, the chaotic churning of life. But after six years away from music, “Fool’s Errand” is a return that uses its harmony and lavishly layered guitars to explore the illusion of beauty in the world. The song is impeccably produced, cleanly thrumming its way before giving way to silence. And then an isolated piano fades into the night’s penumbra. The illusion set with the sun. It’s a beautiful process, but hollowing in its brilliant performance.

It’s a shame that one song has forever marked Carly Rae Jepsen as the expatriate of pop music. “Call Me Maybe” isn’t a bad song, but its proximity to “Friday” in repetitiveness and mood pigeonholed Jepsen to a pseudo-kitsch appreciation. But that sort of hipster fandom really depreciates the efficacious brand of pop that she has polished in the past five years. “Cut to the Feeling” is the ultimate thesis statement for her entire body of work. Clearing the haze of 80’s nostalgia that made E•MO•TION a dynamic pop album results in a song that is grandiose without ever feeling belittling to listen to. Stomping hand-claps and soaring synths jettison the song with an uptempo flair. Where so many stars increase the gap between performance and celebrity, Jepsen has continued to break down the barriers of entry for pop fans, stripping back layers of needless aesthetics that emits crystalline emotion that never shies away from its pure form.

The crescendo has become the butt of too many jokes recently. Post-rock bands like Explosions in the Sky were labeled crescendo-core and subsequently mocked for their over-reliance on this technique of tension and release. The “drop” has become a symbol of the oversaturation of bros in the contemporary EDM scene. However, the use of it in Perfume Genius’ “Slip Away” revitalizes it by stripping it to its base elements. Focusing on the spiritual essence of chamber pop, percussion intermingles with woodwinds before shedding their useless corporeal functions, merging into a cacophony of hammering pianos and ballistic synths. The elements are there from the start, but they all gravitate towards a spiritual core that drives this song into an enchanted crescendo, worthy of every indulgent, blossoming burst.

When rappers craft songs about a certain lifestyle, there’s an untold agreement between fans and the artists. There exists a level of voyeurism and vicariousness in the way we get to peer into the lifestyle of those we listen to. But for JAY-Z, it’s taken to an insulting level. On Magna Carta Holy Grail, JAY-Z rapped about wealth that artists can’t obtain, but corporate America who’s manipulated the system artists exist in, can. It lost its appeal in its opulence. With “The Story of O.J.”, JAY-Z took up his position as hip-hop’s de facto godfather and laid out the path to success. Running counter to the narrative of flaunting material wealth, Shaun Carter strips back any air of superiority and discusses the ins and out of economic longevity over No I.D.s classic boom-bap beat. The Nina Simone sample from “Four Women” is used to show off his wealth in its acquisition. But it’s a subtle show of wealth combined introspection from a man that didn’t need to divulge anything to bolster his legacy, and it’s a welcome surprise. 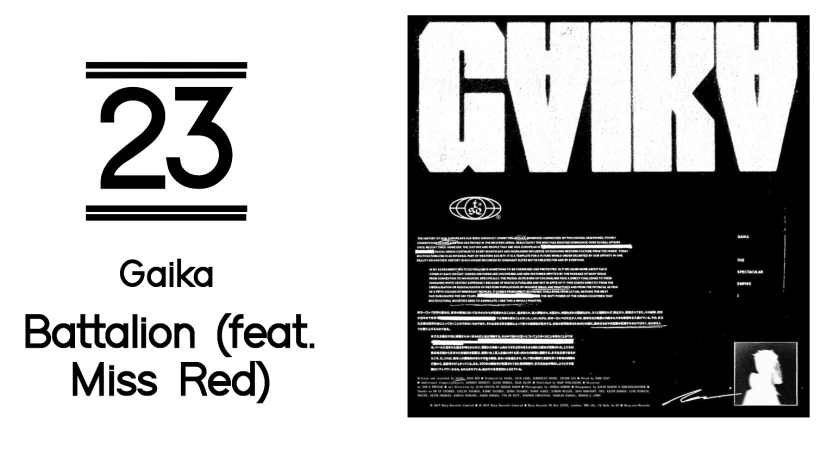 Revolution isn’t something to call for. It’s not a goal for the future, it’s a war for the present. Inequality is an undeniable weapon of mass destruction that has been felt and ignored. Gaika is a soldier in these war games, radical in performance but realistic in belief. “Battalion” isn’t a rallying cry, it’s a horror story of these invisible conflicts, subtle humming until it hisses into view. The low end is full earth-shattering discharges. The overhead feels equal amounts of instability, clapping together with high hats and the roar of titanium raptors. The worst is that there’s nothing to be done for those close to you. There’s a war on us. Fight for others. 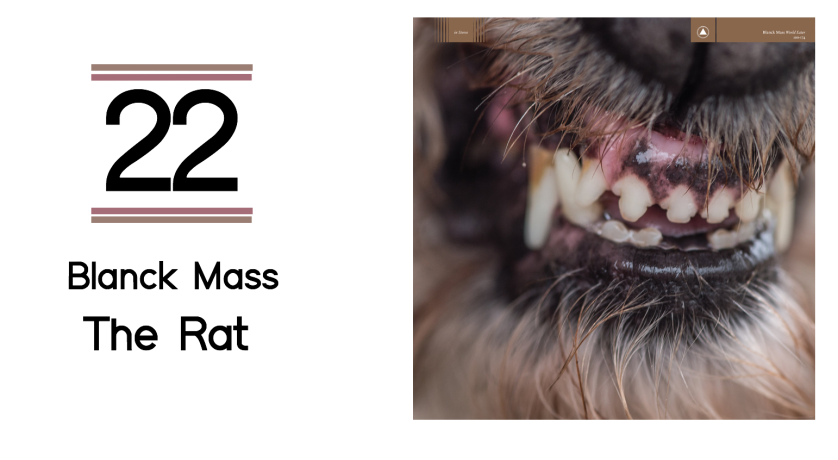 There is nothing on Fuck Button’s albums that could match the sheer disorder and hypnotic sway of “The Rat”. But that’s not to discredit their work. Benjamin John Power’s time with Fuck Buttons has been clearly transferred over to his work as Blanck Mass. But there always seemed to be these self-imposed parameters that restricted Fuck Buttons to limit how excessive and harmonious their songs could be. “The Rat” is the ultimate argument for why Benjamin John Power’s method of music making has vastly improved on his solo albums. The whirling of dark synths collides like waves crashing over each other. Stabbing synths interject with a carnal imprecision. “The Rat”’s exuberance is constantly toyed with in twisted and imaginative ways, untethered and freakish in an ecstatic form. 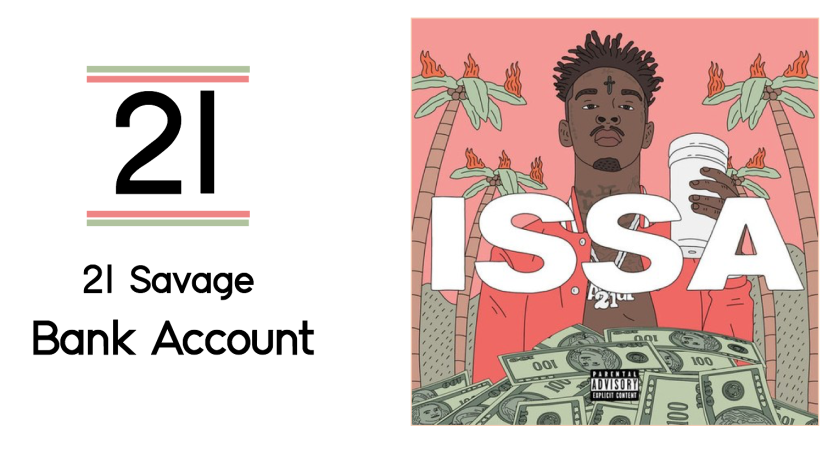 You’d think 21 Savage would lighten up as he began to breakthrough more as an artist and celebrity. And with the announcement of Issa Album, it started looking like he was softening his image. His cartoon face on an album cover with mild pink hues and palm trees on both sides invoke a serene feeling. Then you hear “Bank Account”, the first single from his debut album. Co-produced by 21 and Metro Boomin, the somber trap beat chugs forward with eerie pianos that bend around 21’s icy flow. The same way 21 talked about murder and death on 2016’s Savage Mode is the same way 21 talks about making money. Even when his means change, his style is consistent and cold-blooded. To 21, changing the scenery doesn’t mean anything about him or his distinct voice has changed.